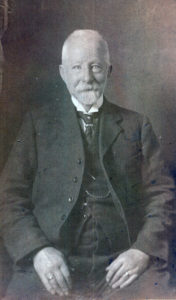 Henry JOHNSTON qualified at Queen’s University, Belfast, in 1872 and was also a Licentiate of the Royal College of Surgeons, Ireland and of the Apothecaries’ Hall in Dublin.  He set up practice in Stranorlar, Co Donegal in 1875 and became a well-known and much appreciated G.P. until his death in 1932. 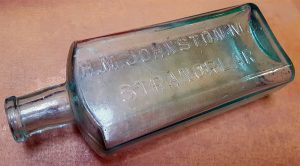 Dr JOHNSTON was also the owner of the car which was commandeered by the IRA in 1921.  The story of how this happened has become widely known through the popularity of the song “Johnston’s Motor Car” written by Willie Gillespie of Ballybofey.

There was to be a major offensive in the Falcarragh area of Donegal and there had been a build-up of arms in the Rosses for this purpose.  Henry McGowan had supplied his quota and, when the Falcarragh raid was called off for tactical reasons, Henry had to collect his rifles, so needed suitable transport. 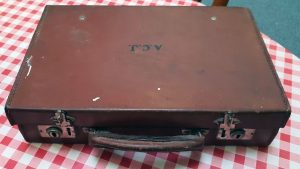 The quartet decided they would ambush Dr Johnston’s car.  He was not the kind of man who would like to see his car used on an IRA mission !

How could they get the car ?

They sent a telegram to Dr Johnston, asking him to call out to Mrs Boyle at Reelin’ Bridge.  Mrs Boyle was of patient of Dr Gormley so they knew that Dr Johnston would welcome a chance to take away one of Gormley’s patients…

Dr Johnston & his wife set out for Reelin’ Bridge.  About a mile from his destination he had to get out of the car because there were posts blocking the road and he found himself staring at a revolver.  He demanded to know what was going on and produced his permit: “You can keep your English permit, we want your motor car”.  They were told to walk to Boyle’s where they would get a pony and trap to take them back to Ballybofey, nine miles away. 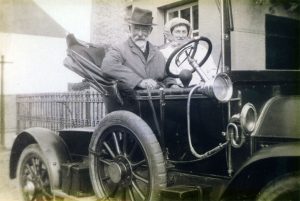 Meanwhile the four IRA men were on their way to Dungloe in Johnston’s car stashed with guns.  They handed over the car to Joe Sweeney in Dungloe.

What annoyed Henry Johnston most was not so much the loss of his car but the words of the ballad “You could hear the din going through Glenfin of Johnston’s motor car”.   It was one of the first in Co Donegal and he was proud of his well-maintained car and resented the slur of it being called noisy. !

Not long after the ambush, British forces landed at Burtonport by sea and captured the car in a raid on Sweeney’s Hotel. 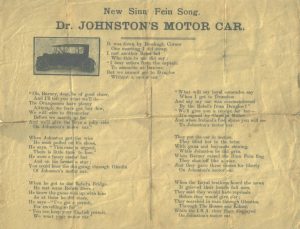